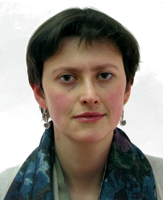 Anna Sevortian was the Director of the Human Rights Watch’s Moscow office from 2010 to 2013. She has fifty years of experience as a civil society and human rights activist in the former Soviet Union, primarily in Russia, Ukraine and Belarus. Previously she worked as the Deputy Director of the Centre for the Development of Democracy and Human Rights in Moscow. Sevortian has a degree in journalism from the University of Moscow and has received many renowned international fellowships. She is currently the Mid-Career Mason Fellow at the Harvard Kennedy School.