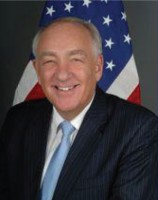 Stephen J. Rapp is Ambassador-at-Large for War Crimes Issues, heading the Office of Global Criminal Justice at the U.S. Department of State. He received his BA degree from Harvard College in 1971. He attended Columbia and Drake Law Schools and received his JD degree from Drake in 1974. Prior to his appointment to his present post on September 8, 2009, Ambassador Rapp served as Prosecutor of the Special Court for Sierra Leone, Senior Trial Attorney and Chief of Prosecutions at the International Criminal Tribunal for Rwanda, United States Attorney in the Northern District of Iowa, as an attorney in private practice, Staff Director of the U.S. Senate Judiciary Subcommittee on Juvenile Delinquency and as an elected member of the Iowa Legislature.