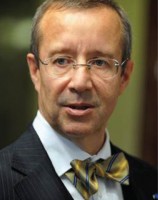 President of the Republic of Estonia Toomas Hendrik Ilves was born on the 26th of December, 1953, in the Swedish capital Stockholm, and has spent much of his life living and working in a total of five different countries. The Estonian values prevalent in his childhood home, the education gained at one of the US’s best universities, the jobs connected with Estonia’s present and future over the last quarter of the century – this is what has shaped Toomas Hendrik Ilves as a person and as president of a small European country in the 21st century.