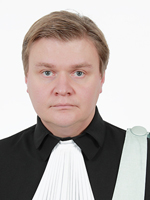 Pavel Gontšarov is a judge in the Criminal Chamber of the Tallinn Circuit Court. He has previously worked as a judge in the Tallinn City Court (2001-2002), as the Chief Judge of the Narva City Court (2002-2006) and the Chief Judge of the Viru County Court (2006-2012). In addition, he has dealt with issues related to personal data protection in international criminal proceedings as an ad hoc judge of the Joint Supervisory Body of the Eurojust. Since 2010 he is an ad hoc judge in the European Court of Human Rights. He has participated as an expert in many OSCE and EU projects in Kazakhstan, Ukraine, Kyrgyzstan, Moldova and Montenegro.  Gontšarov obtained his legal education at the University of Tartu and his LLM degree at the University of Exeter. Gontšarov obtained his legal education at the Universities of Tartu and Exeter.