Human rights vs emergency situation, May 2020

88% of Estonian residents find that everything is alright with human rights in our country and 83% of the respondents believe that the emergency situation restrictions did not breach anyone`s human rights, these are the results of the survey commissioned by the Estonian Institute of Human Rights and conducted by Turu-Uuringute AS.

Turu-Uuringute AS conducted an online survey among slightly more than 1000 Estonian residents from May 14 to 18. The survey asked people to assess whether the emergency situation has breached people`s rights in Estonia and whether state institutions, the media and the business sector have respected and protected human rights in their work. In addition, people`s perception of whether the Estonian Constitution protects their rights and values and whether the obligations provided in the Constitution matter to people.

This time, respondents were also asked whether they themselves have breached someone`s human rights. An average of 9% of all respondents answered yes to this question: men 12% and women 6%. 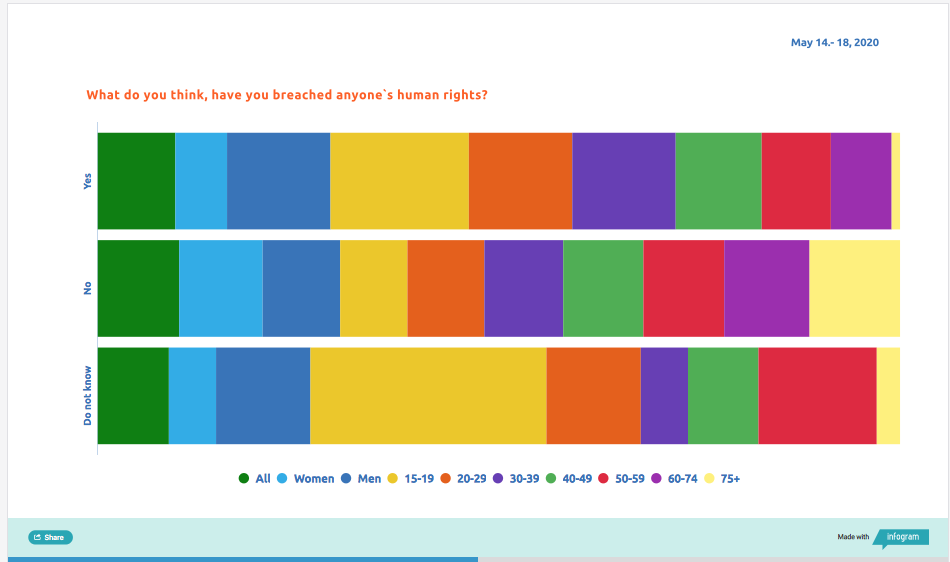 Proportionally, the results have moved in a more positive direction across all groups of respondents. People`s assessment of respect for human rights is heavily affected by their language of communication, the correlative nationality, level of education and income, social position, and to a certain degree, also place of residence, income.

83% of respondents felt that the emergency situation restrictions have not breached anyone`s human rights. 14% believed that the emergency situation has breached their human rights, perceived especially among the age group 40-49 (20%) and people of other nationalities (19%) and people with undetermined citizenship (25%) and residents of North-East Estonia (24%). The restrictions were also perceived negatively by freelancers (25%) and middle managers (21%). 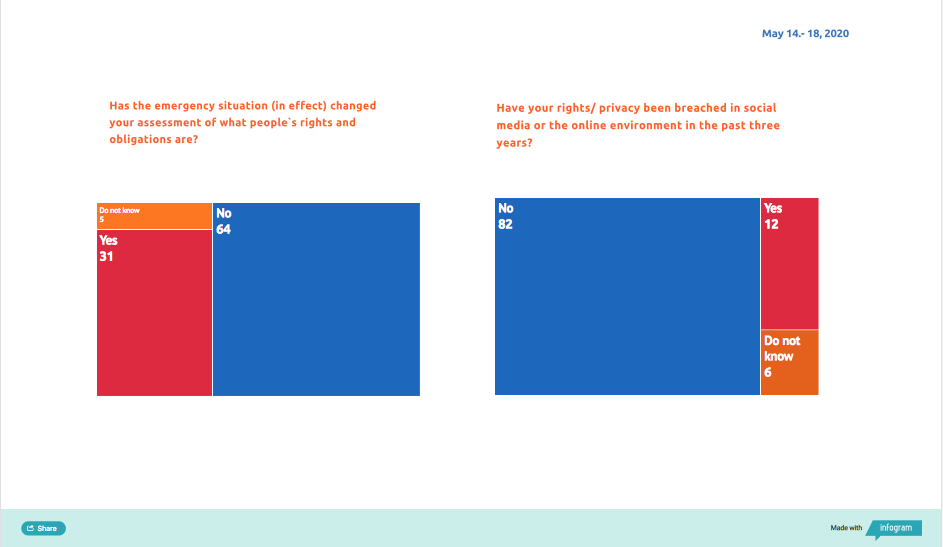 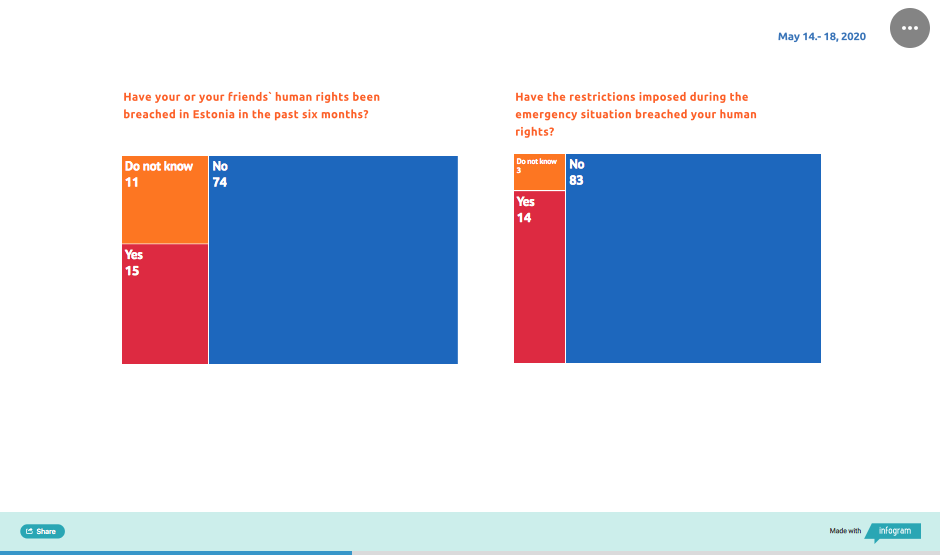 The percentage of people who answered “Yes“  to the question whether the Estonian Constitution protects their rights and values was 82. If 90% of Estonian citizens believe that the Constitution protects them, then Russian citizens and people with undetermined citizenship answered “Yes“ 52% and 67% correspondingly, it was 83 % among citizens of other countries. 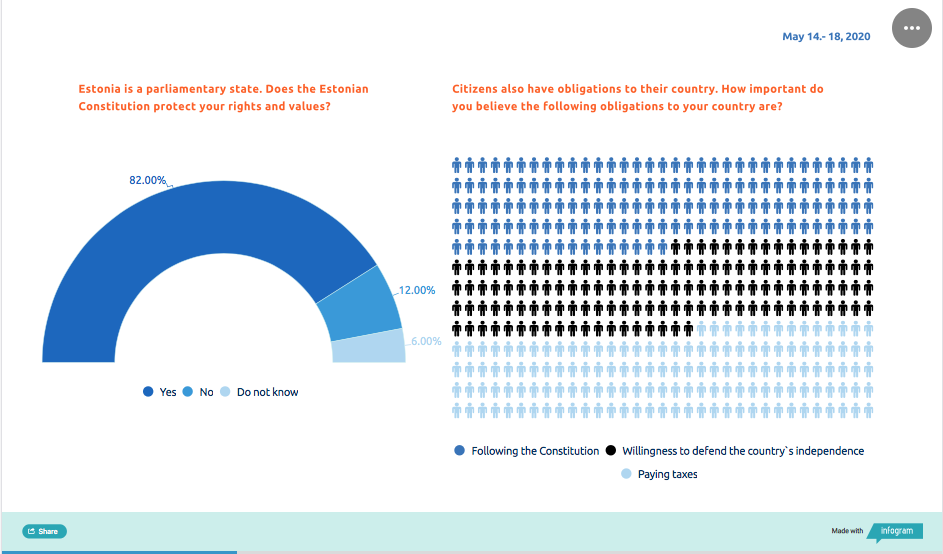 It is also important to the respondents that the Estonian Constitution states not only the rights but also the obligations. 96% considered respect for the Constitution important, 94 % paying taxes and 86% of the respondents believed that willingness to defend the country`s independence is important.

The respondents believe that over the past three years, human rights have been respected and defended most in the work of the Police and Border Guard Board  (74%), the healthcare system (73%), the Tax and Customs Board and local municipalities (66%), the Government (62%), the Defence Forces 59%, the legal system (58%), companies based on public capital (48%) and private capital (42%). 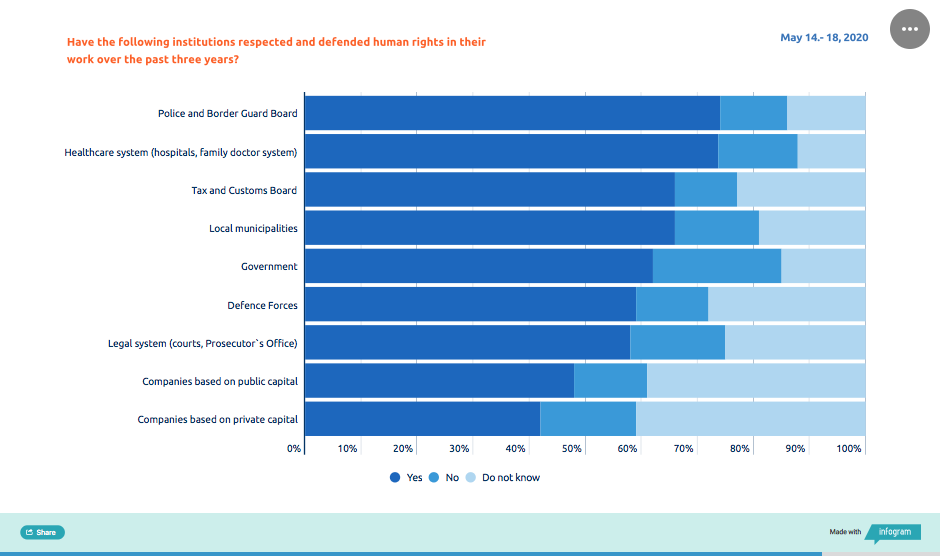 The respondents felt that the Estonian Public Broadcasting has upheld human rights in its work the most– 67%, and 14% believed the contrary to be true and 19% responded “I do not know“. In case of Estonian private media, the results were correspondingly 44%, and 21% believed the contrary and 35% were unable to state their opinion. In case of Estonian print media, 54% said “Yes“ to the same question,  20% answered “No“ and  26% of the respondents answered “I do not know“. 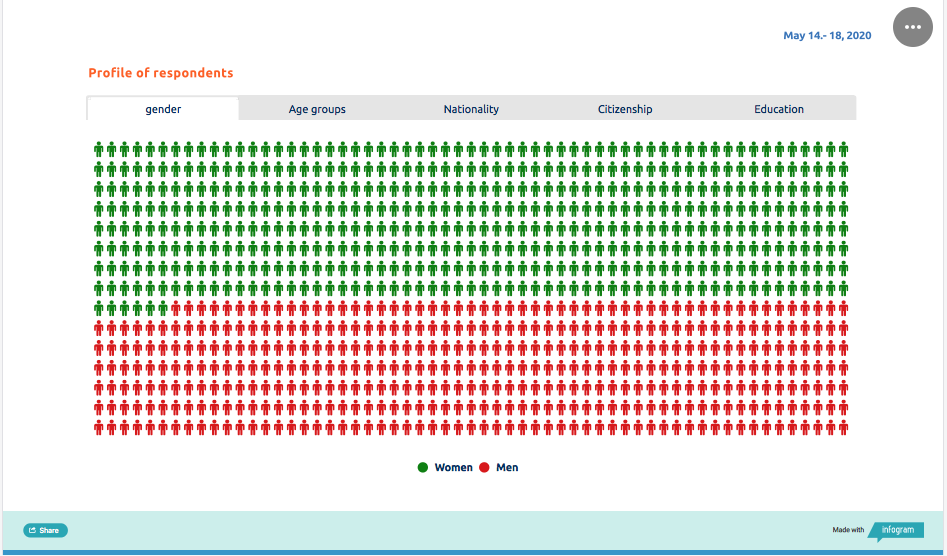